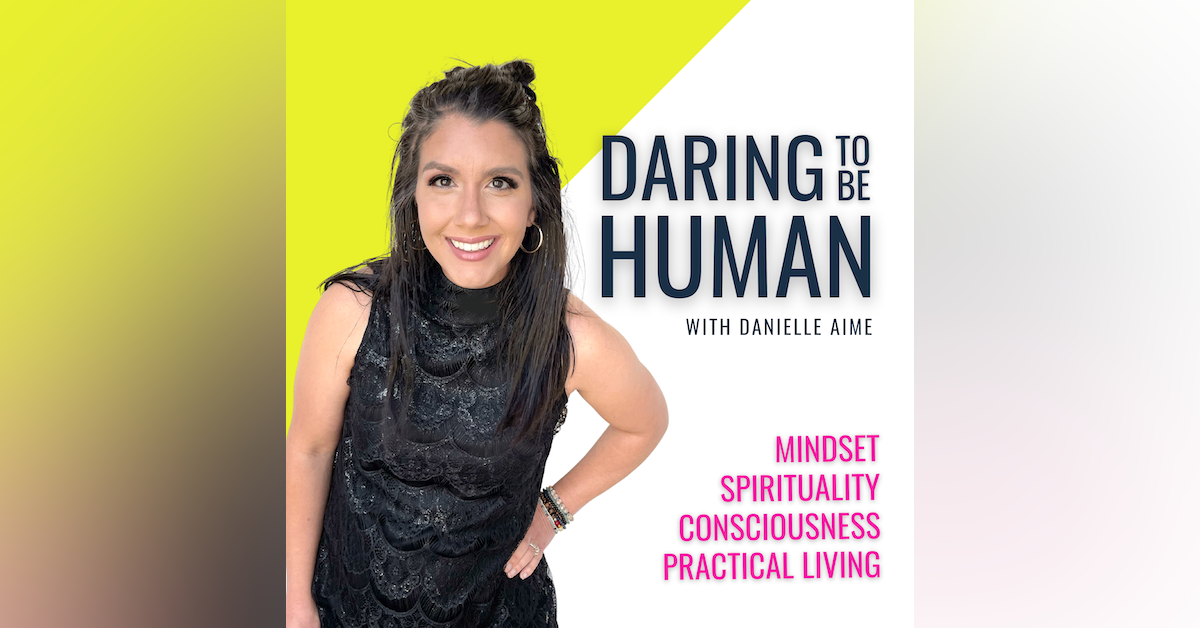 Do you ever get kind of frustrated with the whole aspect of mainstream spirituality, especially in terms of manifesting to where it makes you want to like roll your eyes, hide in the closet and say, Fuck this shit? Well, listen up today because I'm...

Do you ever get kind of frustrated with the whole aspect of mainstream spirituality, especially in terms of manifesting to where it makes you want to like roll your eyes, hide in the closet and say, Fuck this shit?

Well, listen up today because I'm going to give you some practical manifesting tips that legitimately can help guide you on your way opposed to making you continuously spin your tail.

Danielle Aime  0:00
Do you ever get kind of frustrated with the whole aspect of mainstream spirituality, especially in terms of manifesting to where it makes you want to like roll your eyes, hide in the closet and say, Fuck this shit? Well, listen up today because I'm going to give you some practical manifesting tips that legitimately can help guide you on your way opposed to making you continuously spin your tail. You want to live where you can fully embrace yourself. You want to live life on purpose and on your terms. You want to tap deeper into your soul as you grow into your purpose work and you no longer want to hide in the shadows. Hey, I'm Danielle, Amy, and I am obsessed with helping humans human. I am on a mission to normalize that we are here to feel, heal, experience, connect and grow. I have transformed many darker sides of this journey into the most incredible life I could imagine. My ducks aren't always in a row. In fact, I think I lost one. But yet I have created a beautiful family comfortable lifestyle and a freedom-based business along the way, all while learning to love and accept myself as a soul that's on a human experience. Through my intuitive teachings, real talks, and guest interviews, I can help you as we help the world to love ourselves just a little bit more. Hey, guys, welcome to this show. So like I said, in today's episode, I really want to talk about practicality. So I think like there's practicality behind anything or sustainability behind anything. And I think there are so many times in life to where, you know, there's this magic way of doing something that's presented and then the reality behind it is it's not going to really work out that way. And no, and then you become cynical over it. Because it's incredibly frustrating let's be honest, it's incredibly frustrating. When you hear people out there that's like, yeah, you I mean, just think positive things and positive things will happen. Well, what happens if your mental state you are more mentally susceptible, or you for whatever reason not even susceptible, you just have more of a fragile mental state. That doesn't mean you're a weak fucking person. It just means like, you may have suffered from more mental health issues and other people. I mean, I'm definitely one, I have had a whole lot more mental things happen in my mind, then, like when I talk to other people, like even though like my husband has PTSD from war, and probably even PTSD from like, abandoned as a child, but especially for more, but the way some of the mental states have been in since feminized men, you know, together the last 12 years. I mean, they still very like are very, I know, vastly vary. And

Danielle Aime  11:00
So this is the importance of when you realize and you start to really harness the power of yourself, you harness the power of manifestation. And there's a line because again until I did the work, I'm going to call it that because everybody's like, so taboo about fucking saying the word work these days. Until I did the shit, that was incredibly painful, and stop looking for the fucking easy button for everything. Meaning, when we're in the stage of looking for the easy button, we don't realize that we have the power to make life easy. We are looking for something to save us. So that's the difference of perspective, we are suffering. And we don't realize that we're causing our own suffering, okay, suffering is a choice. Suffering is a complete choice. And we're, we can be manipulated by guilt, we can be manipulated by fear and all this other shit. And so then we're sitting in this space, in which you feel guilty. That, especially if you're not feeling something bad like you should be feeling something bad. So again, if you've been a person that always feels something bad, well, you're gonna feel guilty that you're not, someone's gonna feel off, it's gonna feel like oh, well, like up here comes that leak, it's coming back in and let you know it's not there. So that's what the work does is allow you to get to the point to recognize when the leaks coming in, to be so hyper-aware to realize like, hey, whoo, my water pressure is off right now, something might be leaking, okay, like something might not be wrong. So like, let's do some strategic analysis here, very basic, like step one, like, Let's Ask a neighbor is there pressure down to their pressure and you ask one or two neighbors and their pressures not down, okay? Might be a problem inside of the house. Okay, like something that's actually going on inside of the pipes. And even though it could be outside of your house, because I had that happen years ago. So the point of it is, is like you when you become hyper-aware and realize that your pressure is done instead of being so voided out into your life, you realize something that's not you, you realize something is not going in your favor, and why is that happening right now? Okay, so the second thing that I can give you about in and this took some time again because I was a person that was very attached to my emotions and my feelings defining how I was, I mean, I still have my moments of that today of how that happens for me, but the second thing was more of realizing that like for example, money, especially money for a lot of people is emotionally attached to what's not they're emotionally sad in by debt, or emotionally saddened by something not working. When you disconnect emotion and, and I guess you'd say feeling but  I wish it was different words to use right now.

Danielle Aime  20:34
I am nothing yet I am everything. I am only the perception in which I wanted to find myself in life. And when you can move into a practical perception based on where you currently are, it's not a state of permanence. It's not a state of punishment, you honor where you are, which is the same thing if we want to go a little bit basic as I an Italian this up today is when I was a person learned about the law of attraction through the secret and then I'm like, oh, I'm gonna get like, you know, whatever the hell it was, was something completely outside of my frequency. But let's say I had only been making $1,000 a month and then I'm like, I'm getting a $100,000 check tomorrow. One, I added a timeframe that was completely unrealistic to my system, I definitely did not believe that was possible to I added an unrealistic amount of money to be made with no attachment to how that was coming in. Because my brain couldn't fathom that that could happen because, at that time in my life, I didn't even have $100,000 year. Okay. So that's where you have to have a realistic grasp of where you are. And you do start more like paced pace yourself. So that you're not you're meeting yourself, you're able to set your expectations so the side because they're not even present cuz you're like, Yeah, I mean, that's doable, like a parking space, that's doable. $1,000 for some people is doable. If $1,000 still feels like a whole lot of money to you, then start with $100. Okay, like start with your first client, detach the amount of money, the expectation, if you're selling something, detach, what they're buying, like detach yourself from something and just envelop in what it feels like to have a client envelop what it feels like just to make $100 and validate what it feels like to make $1,000 Then worry about them going further and going more going deeper because you have got to meet yourself where you are because it has everything to do with everything that you're not. Thank you so much for tuning in to another episode of the daring to be a human podcast. Until next time, keep on filling those feelings and expanding further on your soul journey. If you want more head over to daring to be human calm For show notes links to any resources mentioned in today's episode. And if you are looking to take your human journey to the next level, be sure to check out my private member's community. The links are waiting for you at daring to human.com

Email has been submitted.